If you haven’t already seen Total Remake, not to worry, we can criticize it for you wholesale!  It’s the Cinema Recon review of Total Recall!  (sans Mars)  (09:45)

Also, what happens when you make a Bourne movie without Jason Bourne?  You get two guys ripping it apart and talking about Sean Connery, of course!  It’s the Cinema Recon review of The Bourne Legacy!  (49:40)

Also, Christopher Nolan has finished his epic Batman trilogy, and all the shark-repellent-bat-spray in the world couldn’t keep us away!  It’s the Cinema Recon review of The Dark Knight Rises!  (1:01:30)

Nothing to See Here, People

I just wanted to take a minute to let everyone know that I do NOT have 6 new stills of Prometheus to share with you.

I also do not have a new picture of Bane as he glares forward with muffled rage.

There are no new character posters here for The Amazing Spider-man, and I certainly wouldn’t think you’d find an Instagram-style pic of Peter Parker…because that would be ridiculous.

You will also find nary an MIB3 featurette, extended Prometheus featurette, or new Snow White and the Huntsman movie clips.  All of that would just be excessive.

No, I think I’m just going to save the last 17% of these films that we haven’t seen for the theaters.  You’re welcome.

Today on the show, we are a couple of loose cannons…just one more bad action movie away from going rogue!  It’s the Cinema Recon review of Lockout!! (09:30)

Also on the show, Jake tells a grocery bag boy story (04:15) that takes over an hour to get to the punchline (1:15:30)!  Classic spot-on comedic timing you know and love here on Cinema Recon!

Where is it written that sequels have to be bigger in scope and more intricate than their predecessor? I really don’t get it. I mean we see it everywhere. Classic examples, Spiderman 3 or Transformers: Dark Side of The Moon… I mean come on… REALLY!? But what I don’t get even more, is why the costume has to also follow suit (no pun intended… OK, it was kind of intended) and get increasingly more complicated and larger in scope and more… uhhh, patch-ier?

Case in point is the most recent Christopher Nolan Batman trilogy. I recently saw the cover of Entertainment Weekly where Batman (Christian Bale) and Catwoman (who cares, its Catwoman) are featured front and center on the cover in their cosutmes from The Dark Knight Rises. I mean after all, it’s their Summer Movie Preview Issue! But what I cant get over is the over-complication of the Batsuit! I understand that this take on Batman is supposed to be grounded in reality as much as possible. And that the Batsuit is an adaptation of military clothing and armor. And that its supposed to provide functionality while still maintaining protection… but come on!!! Why do they feel the constant need to evolve the Batsuit into something way more than it needs to be!? We all remember seeing George Clooney and thinking… “Ummm, why the fuck does the Batsuit have nipples?” I understand the concept behind its look and development, but I personally feel they went a bit over the top here. I think it gets to a point where they begin to over-complicate things and it starts to distract from the character.

I am sure it wont be that bad or really noticeable at all when we see it on the big screen. I mean after all how often will you see Batman just standing still in broad day light? Usually it’s quick cut action scenes in the cover of darkness so there probably wont be time to analyze all the Kevlar patch locations. But I’ll still know they’re there. Like bedbugs in a cheap hotel – You cant see ’em but you know they’re there… just waiting to ruin your hotel experience… the bedbugs, not Batman. 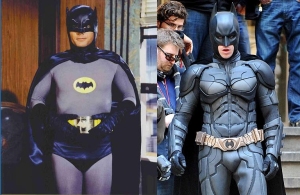 The Dark Knight Rises is set to open in the U.S. July 20th, 2012. And you bet we will be front and center Kevlar patches and all.

What happens when Indiana Jones gets waaaay super jealous of James Bond‘s adorable new charm bracelet??  Find out in our review of Cowboys & Aliens!  (0:40:28)

Our very special guest Cassie joins us to make sure we don’t throw any punches below the belt during our review of Warrior!  (1:05:13)

Today on the show, we received our mission and chose to accept it!  It’s the Cinema Recon review of Mission: Impossible – Ghost Protocol!  (07:55)

As an added bonus, we have seen (and barely understood…) the first 6 minutes of The Dark Knight Rises!  (14:15)

We all know what true the meaning of the holidays is…PRESENTS!!  Paul and Jake exchange gifts in the very first Cinema Recon Secret Santa!  (52:10)

Unless you have been living under a rock, which happens to be under an even larger, more socially inhibiting rock, you should know that the internet is abuzz today with the release of the full The Dark Knight Rises Trailer.  I feel it is a good idea…nay, my duty to post the trailer here for your viewing pleasure on Cinema Recon (The trailer is hosted on Apple and I found it embedded on Trailer Addict):

On the upcoming show, you will hear Jake and I discuss the 6 minute preview we saw prior to the IMAX screening of Mission: Impossible – Ghost Protocol. In my humble-yet-often-more-correct-than-Jake opinion, this new trailer is much more exciting than what we saw Thursday night.  Here, we don’t have to deal with Bane’s grainy voice and we see a lot more of the overall film (plus that football stadium scene…yowsers).

I for one am far more excited than I used to be for this movie.  The “behind the scenes” leaks were killing my anticipation, but now that the film has wrapped, I can just sit back and enjoy the trailers and viral marketing!

What did you think?

Sure, we are all tired of the remakes in Hollywood today, but there are some movies WE think are actually deserving of a remake, and we are going to tell you about them, dammit (and our opinion matters!).  (54:41)

We also discuss movie etiquette, and what really grinds our gears.  (47:45)

Update – In the beginning of the show we state that Hesher was released in 2010, which Jake in all of infinite wisdom, questioned!  Turns out that 2010 was the Sundance screening date, and its official release was May 13th, 2011.