Well, we are that much closer to seeing the finished product that is Christopher Nolans The Dark Knight Rises. According to an article on Superherohype.com, filming is officially complete! We had Batman Begins, then The Dark Knight, and now The Dark Knight Rises which will close out the Batman trilogy. These movies have been some of, if not the best movies adapted from comic books to the big screen, and we are all waiting and extremely curious to see how this wraps up the story of The Batman.

But, if you have listened to Episode 9/25/11 and Episode 10/01/11, you know that both Paul and I are a bit skeptical about how this will turn out. From the way that Anne Hathaway is strutting around in her dominatrix-like cat-eared wearing high-heeled outfit, to the fact that Tom Hardy sounds like a 12 year old prepubescent boy when asking the citizens of Gotham to rise up and take back their city. Both of us aren’t really buying Anne Hathaway as Catwoman, I have no clue what they are doing with Bane, and the Batplane looks like a downgraded version of a Power Rangers set piece.

However, I think even with all this skepticism we are still putting our trust in Christopher Nolan to turn this into an amazing finale for the caped crusader. But what I am looking forward to most of all, maybe even more than actually seeing the film, is not seeing any more god damn set photos from filming! If I have to see Christian Bale leaning up against the catering cart and perusing the bagel options one more time, I’m going to go all Joker on everyones ass! The Dark Knight Rises is slated to open July 20th, 2012 even though most of us have seen pretty much the whole movie by now. By the way Christian… go with the jalapeno bagel, it’ll put some hair on your bat-chest. 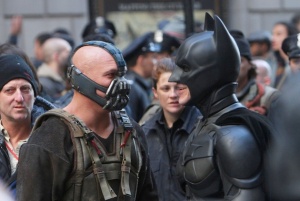 Hey, how do you eat these bagels with that thing on your face?

This entry was posted on Monday, November 14th, 2011 at 10:35 PM and posted in Banter, Jake, News. You can follow any responses to this entry through the RSS 2.0 feed.
« J. Edgar Earns Twice Jake’s Annual Salary in Just One Day
Because You never Saw It: Bellflower »