This is the Dumbest thing I’ve heard all day

And yet, I can’t help but be excited.  Comingsoon.net is reporting that one of, if not THE, greatest comedies of all time may be well on its way to getting a sequel.  Normally this kind of talk should garner no expectations, but given the facts that 1) writers are apparently on board, and 2) Jim Carrey himself is talking about doing it… “so you’re telling me there’s a chance?!” 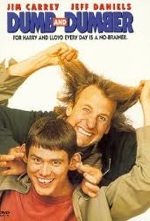 I know if Jake could read, he would be quite excited for this as well.  Lets just hope we get a lot more  Harry and Lloyd! …and a lot less harry and lloyd.

Paul produces and hosts a film/comedy podcast on CinemaRecon.com! He also produces and hosts a gaming podcast on BitFixRadio.com! END_OF_DOCUMENT_TOKEN_TO_BE_REPLACED
This entry was posted on Wednesday, October 26th, 2011 at 8:14 PM and tagged with Dumb and Dumber, farrelly brothers, Jim Carrey and posted in News, Paul. You can follow any responses to this entry through the RSS 2.0 feed.
« The Happening is… er, well… happening.
Hey look at the found footage I found! »