[UPDATED 5/8/12]  Deadline is reporting that Fox has indeed confirmed the R rating for Prometheus.  This is an enormous risk for Fox.  Now we just need to show up, enjoy the hell out of this one, and send studio execs the message that an R rated summer blockbuster really can work.  …Its either that or we fall into another bleak decade of watered down PG-13 films that not even Die Hard or The Terminator could overcome.

[5/7/12]  20th Century Fox appears to agree with the rest of the planet and will not alter the content of Prometheus based upon the MPAA rating bestowed upon them.  We are basing this assumption on the surfacing of what appears to be a legitimate, early ticket stub for the highly anticipated film: 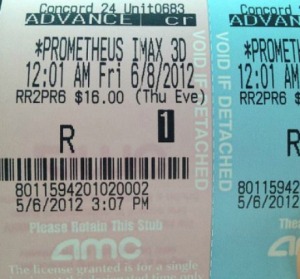 That right there, my friends, is a big fat R rating!  The ticket was scanned by IMDB user “dvonnesoneek” and subsequently the internets were alerted by comicbookmovie.com.

If this is truly the real deal, words cannot describe how happy this makes me.  While I understand that excessive violence and language does not a good movie make, I have always felt that the Alien franchise (or universe, or second removed cousins, or however else Ridley Scott wants to tie Prometheus to previous films) is one that deserves a serious, unaltered, adult tone.

It would have been very easy to slap a PG-13 rating on this and bank on the extra ticket sales (especially considering the rumored hefty budget).  I applaud 20th Century Fox for having the testicular fortitude to make this decision, and will now block out the week surrounding June 8 in order to recover from my head exploding in anticipation.

The Counselor Counsels an All Star Cast

So I talked about these so called “super movies” in my last article. Specifically I was talking about the upcoming John Hillcoat directed film Lawless (formerly titled The Wettest County in the World) based on the novel by Matt Bondurant. I was amazed at the awesome cast they have for this movie, and just excited in general about the bootlegging flick (Booze and guns!? Sign me up!). I also mentioned a couple other upcoming films that also have these super-amazing casts, but was too lazy to remember what they were. But this cup of coffee has chased away my laziness! Laziness be gone!

One of the other awesome-actor-packed movies that I was thinking of is the upcoming film The Counselor directed by an up-and-coming guy named Ridley Scott. He has a small little indie film called Prometheus coming out that you probably haven’t heard of… But much like Lawless The Counselor is packed to the brim with a great cast and a great director which should make this as I like to call it – a super-movie! (I really need to find a better term for that, it just sounds so 1980’s). The plot centers around well respected lawyer who partners up with a wealthy acquaintance of his and some shady associates, to try his hand in the cocaine business without getting caught up in it. Cormac McCarthy wrote the screenplay who also wrote the novel No Country for Old Men, so I can imagine this being in the same tone which sounds awesome. But again, what gets me excited is having an awesome director paired with a great writer, and then the following all star cast (some signed on, some still in talks) –

So now that I think about it, this might just be a reason for all these married people to hang out together. Maybe they are trying to hook up Michael Fassbender with the make up artist or something… who knows. But this is definitely another film that I am excited for and will be keeping an eye on. What do you think about The Counselor, too much of a good thing? Or the more the merrier when it comes to great actors? Let us know in the comments!

While we don’t really see anything new here in comparison to the previously released teaser, I can’t help but post up the latest bit of Prometheus news.  The International teaser was just released and, yup, it still gives me chills:

I honestly cannot remember the last time I have been more excited for a film.  The mystery swirling around this movie, the relation to the Alien universe, the fact that director Ridley Scott wants to “scare the living shit out of you“…it is just the right amount of hype to make someone like me go apeshit with anticipation.

Cinema Recon will be all over this when it releases on June 8, 2012, you can be damn sure of that!