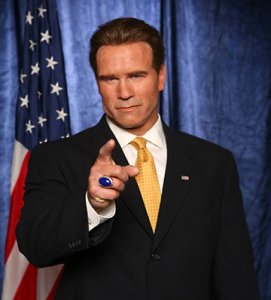 Paul, I signed your diploma

If there is one person on this Earth that deserves their own Truman-esque reality show, its Arnold Schwarzenegger.  The man can’t finish a sentence without making me laugh, whether its calling my state “Caleeforniah” or telling me to “Get My Ass To Mars!”

Just read this quote from Comingsoon.net, where Arnold confirms and comments on the planned Twins sequel, Triplets:

“I would love to do another ‘Twins,'” Schwarzenegger said when asked if there were any past characters he’d like to revist. “As a matter of fact, we’ve been talking about doing one and it’s called ‘Triplets.’ I’d find somebody like Eddie Murphy or someone that people would say, ‘How does that happen, medically speaking?’ and, ‘Physically, there’s no way!’ Then, somehow, we would explain it. That would be hilarious with what we know about someone like him.”

“I can see a poster,” the actor continued. “A billboard with us three. ‘They found another one!’ ‘Triplets!’ ‘Only their mother can tell them apart!’ I would do that in two seconds, because that’s real entertainment. You come out with that movie for Christmas, like December 5th or something like that, and you’re home free.”

Gold.  I could listen to him read the instructions on the back of a Monopoly box, and I guarantee it would be better than any episode of Two and a Half Men.  Better yet, give him a cooking show!  OH!  Baseball play-by-play announcer!  “Striiiike threeeeeeAhhh!”  Just get this guy on TV somehow where he has to talk NON STOP, and as no other character but himself.  Shit, make this a 24 hour Arnold only channel.

Arnold has just got this certain charm about him…a certain “say what I see” humor that can’t really be pulled off by any human being.  Its as if you’ve been cornered by your little cousin and now you must listen to him describe each of his GI Joe action figures down to the most minute, insignificant detail…oh, but your little cousin was also the Terminator.

As has been mentioned from time to time on the show, if you’ve never had the joy of listening to a DVD commentary by Quaid himself, 1) Get an Arnold DVD, 2) Find some friends, and 3) Stop laughing so much, you’re laughing far too loudly, and it is annoying the elderly neighbors.  Just listen to the following “Greatest Hits!” from his Terminator 3: Rise of the Machines ramblings.  Some of my favorite lines include:

If this world deals with big breasts, then so be it, I’m just gonna have bigger breasts

Oh my god, did you see Schwarzenegger naked?  They showed his butt!  I even saw something in front!

Paul produces and hosts a film/comedy podcast on CinemaRecon.com! He also produces and hosts a gaming podcast on BitFixRadio.com! END_OF_DOCUMENT_TOKEN_TO_BE_REPLACED
This entry was posted on Wednesday, April 4th, 2012 at 12:27 PM and tagged with Arnold Audio Commentary, Arnold Schwarzenegger is hilarious, Terminator 3: Rise of the Machines, Triplets, Twins Sequel and posted in Banter, News, Paul. You can follow any responses to this entry through the RSS 2.0 feed.
« Cameron Crowe and the Law of Diminishing Returns
A clip from Episode 04/01/12 – “Liam Neeson Impressions” »