Because You Never Saw It: Beginners

It’s all but incomprehensible to me that Ewan McGregor continues to get roles in which he has to play an American. It’s the worst American accent in the history of motion pictures. It’s flat, nasal, horribly distracting and on more than one occasion has effected my enjoyment of the film. I suppose it’s ultimately a tribute to the quality of film “Beginners” is that, while I noticed McGregor’s accent, it did not deter me from enjoying this film immensely.

The movie simultaneously follows Oliver (McGregor) at two different points in his life. One period has Oliver as he takes care of his father who is dying from cancer. His father (Christopher Plummer), who just four years earlier, came out to his son, refuses to go quietly. He takes a lover, joins every gay-related group he can find and is intent on living his life to the fullest possible extent.

In the second period, Oliver’s father has just died. Oliver, dispondent and confused, meets Anna (Melanie Laurent) at a costume party. This part of the film unspools like a protracted meet-cute, with each subsequent scene intent on amping up the cleverness quotent. Courtship, conflict, resolution. You get the drill.

There are no slackers among the principles of the cast. McGregor holds his own, my problems with his accent notwithstanding. He’s a charismatic actor whose comedic and dramtic skills play on both fronts. Christopher Plummer and Melanie Laurent are absolutely fabulous. So spirited and against type is Plummer’s performance that had this film not been so readily ignored by filmgoers, I’d say he would be a shoe in for an Academy Award. I’m positive that at the very least a nomination will come in due time. Laurent, last scene in “Inglourious Basterds,” is a knockout. While the role of the quirky ingenue/genius/savior has been played before by the likes of Natalie Portman and Kirsten Dunst, she adds a wonderful fragility to her character.

Ultimately, the film is about fathers and sons and the sacrifices we make throughout our lives. It’s about the imprints our parents leave on us and how they dictate, for better or worse, our lives going forward. In the end, we are never prepared. Our parents do the best they can, but they are only human. That may all sound like crappy pap, but it doesn’t make it any less true. 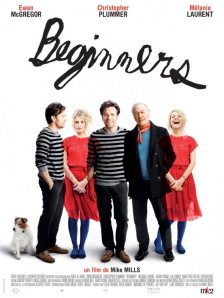 This entry was posted on Monday, November 21st, 2011 at 2:18 PM and posted in Billy. You can follow any responses to this entry through the RSS 2.0 feed.
« It “Wood” Certainly Seem No Cartoon is Safe
Awesome new posters up! (posters may not actually be posters) »

One response to “Because You Never Saw It: Beginners”