DROP IT! Joel Kinnaman is ROBOCOP!

So my good friends, nay, my BEST friends over at Deadline (I can make up friendships if I want to don’t judge me. I’m friends with Snookie too, and that guy from the Old Spice commercials, I like to diversify my friendships) bring us the news that Alex J. Murphy will be played by actor Joel Kinnaman, best known currently for his role in the AMC series The Killing. And while he did have a pretty awesome performance in Safe House, I am not quite sure what to think about this. I am hesitantly excited as I like to say. I think there is a fine line with the character of Alex Murphy and Robocop and it could easily go from serious to cheesy real quick.

Paul and I recently discussed the news that Gran Torino scribe Nick Schenk was brought on board to write the script, and I think that is a great move for the film. Gran Torino had straightforward, visceral, non-apologetic, tell it like it is dialogue which caused some controversy and offended a lot of people (not me, I loved it!). With sharp writing, and director José Padilha bringing in some of that Elite Squad action I definitely think the building blocks are there to stay true to the feel and tone of the Robocop series, I just hope a somewhat younger actor can keep up and not drag down the film.

But what we are all forgetting is the fact that Joel Kinnaman played the giant douche-bag role of Skyler in the CGI nightmare and all around horrible movie The Darkest Hour!!! You can check out our review of that piece of crap here. But maybe if he can make me hate a character that much, he can turn it around and make me love a character too. We will definitely be keeping an eye on this movie and on you Joel… don’t screw up my movie! 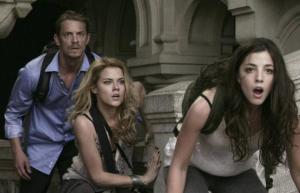 OMG seriously!? The dude behind us is going to be Robocop!?