A quick and dirty recap of all the winners from last night’s Academy Awards.  How many did you get right?

Best Documentary Feature
“Hell and Back Again”
“If a Tree Falls: A Story of the Earth Liberation Front”
“Paradise Lost 3: Purgatory”
“Pina”
“Undefeated”

Best Documentary Short Subject
“The Barber of Birmingham: Foot Soldier of the Civil Rights Movement?”
“God Is the Bigger Elvis”
“Incident in New Baghdad”
“Saving Face”
“The Tsunami and the Cherry Blossom”

Best Achievement in Sound Editing
“Drive”
“The Girl With the Dragon Tattoo”
“Hugo”
“Transformers: Dark of the Moon”
“War Horse”

Best Achievement in Sound Mixing
“The Girl With the Dragon Tattoo”
“Hugo”
“Moneyball”
“Transformers: Dark of the Moon”
“War Horse”

Best Achievement in Visual Effects
“Harry Potter and the Deathly Hallows Part 2”
“Hugo”
“Real Steel”
“Rise of the Planet of the Apes”
“Transformers: Dark of the Moon”

We just wrapped our live Cinema Recon broadcast of the 84th Annual Academy Awards! We started right on time at 4:00pst and powered all the way through until nearly 5 hours later, when The Artist was announced as the 2011 Best Picture!

Thank you so much to everyone who tuned in and participated in our first big live event! We had such a great time putting on the live show, we’d love to do another as soon as possible. It will course always comes down to what the listeners (now viewers!) want, so if you liked this show, please drop us a line and tell us what you thought!

It will be a red carpet affair this February 26th (This Sunday!) @ 4:00 PST at the Cinema Recon Studios in San Ramon!  Join us for a special episode where we will bring you our commentary of the 84th Annual Academy Awards LIVE and uninterrupted!

Watching us is easier than you can possibly imagine!  Do you have a computer?  Do you have a TV?  Then you’re ready to invite Cinema Recon into your living room for Oscar night! (Disclaimer: If you do not have a computer OR a TV, we are sorry, but we don’t want poor people listening to our show)

Here’s everything you need to know:

See you this Sunday!!

For Your Consideration: The Nominees, a Primer

Oscar season is upon us and like always there is a fair share of controversy surrounding the nominations this year. I’ve been watching the Oscars from a fan’s perspective for a lot of years now.  It’s easy even for a layperson like myself to recognize that the Oscars have always been less a vehicle that strives to shine a light on the best work from the previous year, but a machine driven by Hollywood politics and studio power brokers all too willing to prove they have the biggest cock in the room. In my honest opinion, I don’t think the Academy would have it any other way. The broadcast is a rich pageant of pomp and celebrity and in the Academy’s ever increasing desire to maintain relevancy, they have courted any storyline, whether it be bad or good, as a mechanism to get people talking or better yet watching the show.

Of course, this may sound a little jaded, but don’t get me wrong; I love the Oscars. I love the three hour pre show in which glad handers pester the actors, who seem like they’d rather be anywhere else, about what they’re wearing and if they think they have a shot at walking away with a statue. I love the host, whomever it may be. I mean, really, is there any more of a thankless job than the host of an awards program? There’s no way to be edgy and saintly and charming and witty all at the same time without pissing someone off. And then you get what you get last year. Honestly, I defy anyone to find more riveting television than watching James Franco crash, burn and give up, followed by Anne Hathaway, running around backstage like a manic pixie, desperately trying to compensate for Franco’s half-stoned phone-in. Classic.

I could literally go on for 10,000 words on why I love the Oscars, but this piece does have a point, I assure you.  Let’s talk about the nominees for the major categories, shall we.

A couple of years ago, the Academy, publicly derided for not giving The Dark Knight a Best Picture nod, decided to mix it up a bit and expand the category to ten nominees. After two years of stretching the definition of what Best Picture means (The Blind Side…Best Picture…you’ve got to be fucking kidding me) they tinkered with the process yet again and set a floor of five nominees and ceiling of ten. Of course, it didn’t really change things. There are nine nominees this year and while I can make a case for eight of them, my jaw hit the floor when I saw that Extremely Loud and Incredibly Close was nominated for Best Picture. Scott Rudin, who is by all accounts a brilliant producer, having championed films by the Coen Brothers, David Fincher and Paul Thomas Anderson, must’ve made some deal with the devil to get that insulting, over-sentimentalized piece of garbage a nomination. Sure, it has all the elements of a Best Picture: star power, an apt director, good source material, and an annoying child actor pulling at your heartstrings. However none of those elements congeal to make anything resembling a good movie.  Come Oscar night, it’s a two horse race for Best Picture with The Artist and The Descendants leading the pack. There will be a strong contingent pulling for The Help, if for no other reason than it made the most money out of all the nominees. In a fantasy world, where people like me get a vote, mine would be cast for The Artist. Call it derivative, call it gimmicky, I don’t care. It worked on a level that most films seldom do these days.  It made you laugh, it made you cry and it satisfied the soul.

For me it’s less about who was nominated than who wasn’t. If you follow the site or listen to the podcast, you know how I feel about Michael Fassbender’s performance in Shame. I consider it a crime against humanity that he was not nominated for what I consider to be  one of the finest performances in recent year’s. As far as the performances that were actually nominated, I have a sneaking suspicion that Jean Dujardin and George Clooney may split votes here. Without a clear majority, the projection becomes a little less clear. Look for a major upset in this category with Brad Pitt, in by far his most winning role to date, or Gary Oldman, in full-on career achievement mode, taking home the statue.

Tough category. Really tough. Fantasy world: Rooney Mara. No other nominee took as many chances or transformed themselves so completely. It’s a trail blazing performance and I can’t help but just be happy she got some recognition for it. Meryl Streep was great as per usual, but I don’t see it happening. Likewise with Glenn Close (Although, if there was a “Most Creepy Performance” category, Close would win it in a walk). I think Michelle Williams’ nomination is, for lack of a better word, filler. Williams has become an award show darling in recent years, but if it were a stronger year for women, the performance would not hold up. Real world: Viola Davis. The Help was by in large a heap of manipulative drivel, populated by a gaggle of scene chewers. However, Davis stood tallest with a muted, subtle performance full of pain and quiet desperation.

Fantasy World: Nick Nolte. Warrior was a criminally under-seen movie. Sure, at first glimpse it looks like a stock underdog story, but dig a little deeper and you find a film populated by three great performances: Joel Edgerton and Tom Hardy as brothers on collision course with one another, and Nolte, as their father, desperately trying to atone for a past life’s worth of sins. Real World: Christopher Plummer in Beginners. Book it.

Octavia Spencer is going to win this award. It’s a loud, boisterous performance that the Academy just loves. Bejo, Chastain (who could’ve been nominated in any of the other 80,000 performances she gave this year) and McTeer (creepier than Close?) have no shot.  At least they can get dressed up, get loaded at the Vanity Fair party and help themselves to all the schwag they can carry. Neither does McCarthy, who was hysterical in Bridesmaids, but should be given something for delivering the funniest line of the year: “It’s coming out like lava!”

Any category that is populated by the likes of Scorsese, Allen, Payne and Malick is going to be tough to handicap. Scorsese is tricky. If the voter’s feel that his win for The Departed is enough to atone for not giving him the award for Raging Bull or Goodfellas, then it’ll go to someone else. If not, maybe he gets another for a lesser work. Allen and Malick won’t be at the ceremony and it’s naive to think that doesn’t weigh on the voter’s decision. Payne’s best work is done in the writing and The Descendants isn’t sexy enough technically to garner much support.  The Artist’s Hazanavicius has to be the favorite. Sure, he gave himself the restriction of making a silent film, but he pulled it off famously.

Given that it’s split into two categories, it makes it easier for the Academy to include edgier fare or give recognition to films that may have just missed the cut for Best Picture. This year, lesser known films such as A Separation and Margin Call got nods in the Best Original Screenplay category, while Best Picture contenders The Ides of March and Tinker, Tailor, Soldier, Spy get the consolation prize of a nomination for Best Adapted Screenplay. The Academy loves a comeback and as a long time Woody Allen apologist, I would love him to take home another Oscar, even though he couldn’t possibly care less. As for the Adapted Screenplay category, The Descendants is your winner, especially if Academy voters decide on The Artist for Best Picture.

In the end, I have no idea what I’m talking about, but I can tell you this: I have seen every movie nominated in a major category, which is more than I can say for most Academy voters. It wasn’t a particularly strong year for movies, but it won’t stop me from endlessly pondering the outcomes. Do the Academy Awards still matter? Did they ever? I don’t know. But, I’ll be watching and yelling at the TV with a fervor of a crazy person. If you’ve made it to this point of this opus, you probably will be too. 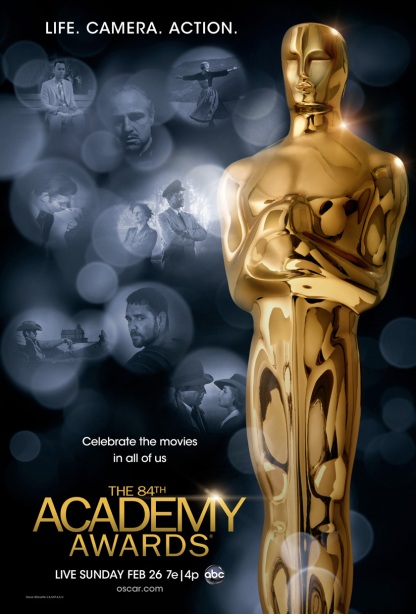 The 2011 awards will be February 26th at 4:00, and you know Cinema Recon will have something special planned.  Keep listening for updates!  The announcements for nominees will likely follow very soon.