Um, Waiter? There’s some Robocop in my Star Trek

Moviehole provides the news that Peter Weller is the latest to sign up for J.J. Abrams’ Star Trek sequel!  The actor, who played the iconic Robotic Police Officer Man in two films, is on board for an unknown role.  Other new-to-the-series-stars that recently signed on were Alice Eve and Benicio Del Toro!

So… Before we get a Robocop remake starring the actor in the prequel to the X-Men franchise, the original Robocop is going to star in the sequel to the re-imagining of the original Star Trek?  …I’m so excited/confused! 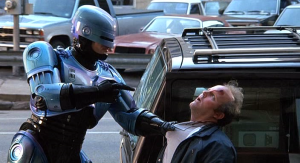 Quick question...what movie is this??

Paul produces and hosts a film/comedy podcast on CinemaRecon.com! He also produces and hosts a gaming podcast on BitFixRadio.com! END_OF_DOCUMENT_TOKEN_TO_BE_REPLACED
This entry was posted on Monday, December 5th, 2011 at 1:29 PM and tagged with J.J. Abrams, Peter Weller, Robocop, Star Trek 2, Star Trek sequel and posted in News, Paul. You can follow any responses to this entry through the RSS 2.0 feed.
« Bradley Cooper Plans to Drink Heavily in 2012
Off the Mic: The Twilight Saga: Breaking Dawn – Part 1 »