Off The Mic: The Muppets

Upon waking from my turkey coma this holiday weekend, I rallied my family to go see The Muppets.  It was not too difficult.  After all, we are a family that watches The Muppet Christmas Carol without fail each and every Christmas.  We also own all of the original Muppet movies on VHS, which have been worn thin from countless viewings (This does not include Muppets in Space or that weird pirate Muppet movie with Tim Curry).

I was particularly excited because, not only am I obviously a Muppet fan, but I knew that I would otherwise not get to see this movie.  Jake had no particular interest, which makes me think either 1) he is not a Muppet fan, 2) he is not fun, or 3) both.

But I can’t really blame him.  I mean, who really cares about the Muppets anymore?  Long gone are the days of hit movies and successful TV shows.  It is not profitable for movies today to have witty, zany humor that doesn’t rely on lazy pop culture references or bad CGI.  So there is no room for the Muppets in today’s remake/reboot/ADD society, right?

Synopsis:   Walter and Gary (Jason Segal) are brothers, as well as inseparable life-long pals.  Gary has a beautiful girlfriend in Mary (Amy Adams), who would very much like to be a bigger part of his life.  Walter is…made of fabric and has a hand up his backside (okay, the movie doesn’t quite touch on this, nor does it need to).  He’s a puppet.  Walter also happens to be the biggest Muppet fan on the planet.  When Walter gets his chance to visit the historic Muppet Theater in LA, he stumbles upon an evil oil baron’s plot to tear down the theater and drill beneath it.  Now Walter, Gary, and Amy need to find the scattered Muppet crew and reunite them in order to raise the money to buy back their theater with one final show.

What Works:  Quite simply, when the Muppets are onscreen during The Muppets, the movie is at its best.  Jason Segal, who also stars, cowrote the screenplay here.  What comes through is a labor of love, and obvious fanboyism from Segal.  The film works hard to ensure all Muppets get their face time, which is no easy feat.  There are dozens upon dozens of characters in this film.  Each is given the opportunity to display their trademark quirkiness, while the movie still gravitates towards the expected big names (Kermit, Fozzie, Gonzo, Ms. Piggy, Animal).  The Muppets is meant to be a throwback to the Muppets we remember, and not the more recent films I briefly mentioned above.  It succeeds.  It was a joy and delight every time Fozzie told a bad joke or Kermit played the banjo.

The film is very conscious of what it is:  a fun, lighthearted comedy with puppets as its cast.  Knowing this, it is not afraid to break that pesky fourth wall to essentially look right at the audience and say “HEY! Pretty fun, eh?!”  It is constantly referring to itself as a movie, talking to the audience, and poking fun at the Muppets in general.  It seems to say exactly what I joked about above:  “Sure, we have not been relevant in a long while, but that doesn’t mean we stopped being entertaining!”  When the film does this, it really feels like you are watching the original Muppet Show.

It also does not hurt that the script is quite smart.  It is such a relief to see a family film like The Muppets when we have become inundated with things like Yogi Bear, Alvin and The Chipmunks, and The Smurfs.  Those films seem as if they are just cashing in on your nostalgia.  The Muppets wants to take a seat amongst your most fond Muppet memories.  It does this through a tight, simple story, entertaining musical numbers, and clever jokes.  It also feels updated without having to rely on a million current pop culture references.  Sure, the celebrity cameos are numerous, but that has always been expected and part of the fun with these guys.  Jason Segal really took the time to not only give us a proper portrayal of the classic Muppets, but also to create a strong, witty script that holds up for a new generation of fans, as well as the old.

What Does Not Work:  I have very little negative to say about The Muppets.  Honestly, my only unhappiness came when there weren’t Muppets onscreen.  Amy Adams and Jason Segal do a wonderful job in their roles as “The Humans” in this film, but I still could not be swayed from wanting more Muppets.  Sure, this is not a great critique.  It may be to the film’s credit that it makes me want more, but it was the one thing I remember thinking in between scenes of Muppet mayhem.  I wanted more jokes, more silliness, and more puppeteering.  The movie’s only slow moments are when exposition is necessary from the actual human cast.

Also, I did feel that Walter’s story was a tad forced at times.  Maybe this is only because I was obviously not accustomed to the new Muppet created for this movie.  Often I just thought him to be a little bit annoying…although he does have one of the best scenes in the film – his reaction upon hearing the evil baron’s oil plot.  I may be nitpicking, and even as I write this, I am actually starting to like him more as I remember that scene.

Would I Recommend This Film?:  Absolutely.  If you have kids, then you should go see this film right now, no excuses.  There should be more family films out there like this one.  But even so, adults who just want a warm, intelligent comedy will be happy here too.  The film is accessible to everyone.  Old fans will get their jollies, while new fans are not required to have any previous exposure to the Muppets.

It may be the recent absence of the Muppets, and this film’s embracing of that concept, which is most endearing.  Or it could be the witty jokes and enthusiastic portrayal of our favorite characters.  Or it could just be that this is a fun, smart, family adventure that stands out amongst all-to-frequently terrible nostalgic movies today.  Whatever it may be, many times I found myself not just laughing, but smiling in this movie.  Unless you are not fun, you will too. 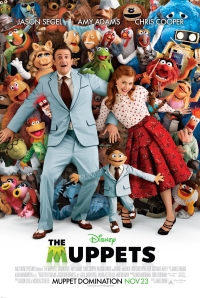 Paul produces and hosts a film/comedy podcast on CinemaRecon.com! He also produces and hosts a gaming podcast on BitFixRadio.com! END_OF_DOCUMENT_TOKEN_TO_BE_REPLACED
This entry was posted on Monday, November 28th, 2011 at 12:22 PM and posted in Paul. You can follow any responses to this entry through the RSS 2.0 feed.
« Happy Thanksgiving from Cinema Recon!
For Your Consideration: Melancholia »